Antti Herlin and Jouni Keronen in the environment insert of Talouselämä: “No-one had any idea what significant results CLC would achieve in the early years”.

The environment insert of Talouselämä – Finland’s leading weekly business magazaine – tells on January 21, 2022 the story how Climate Leadership Coalition has grown to be the largest climate business network in Europe. The meeting that led to the establishment of CLC was convened by Antti Herlin, Chairman of the Board of KONE. Led by CEO Jouni Keronen, CLC has worked closely with Finnish companies, cities, universities, research institutes, interest groups and foundations in climate change mitigation for seven years. The text below is a translation from the original Finnish version.

CLIMATE LEADERSHIP COALITION, FOUNDED IN FINLAND, GROWS TO BE THE LARGEST CLIMATE BUSINESS NETWORK IN EUROPE

The climate business network Climate Leadership Coalition’s mission is to speed up the development of investments, products and services that combat climate change.

Climate Leadership Coalition or CLC makes policy proposals for the public sector: EU, governments – mainly Finnish government by now – cities and municipalities. The policies are intended to achieve far-reaching decisions to create the conditions for economically viable business. CLC was founded in 2014 by the Finnish companies Caverion, Fortum, KONE, Neste, Outotec, St1 and the Finnish Innovation Fund Sitra. The meeting leading up to the foundation of CLC was convened by Antti Herlin, chair of the Board of Directors of KONE.

In the seven years since its inception, CLC has grown into the largest climate business network in Europe in terms of member numbers. CLC now has 89 organisational members including companies, universities, trade organisations, cities and research institutions. CLC members employ 530,000 people globally and represent also 70% of the market cap on OMX Nasdaq Helsinki. CLC also has 54 influential personal members.

”CLC is a success story. When we founded the coalition, no-one had any idea of how popular it would become or what significant results we would achieve in the early years. This goes to show how important business leaders consider climate change. The risks caused by climate change and the enormous business opportunities created by climate transformation are becoming better understood from one year to the next,” Herlin says.

CLC runs regular theme group meetings for its members. The groups decide the topics to focus on each year and consider among other things new business solutions and best practices. The groups have also created ideas and planned projects in practice. For example, the deep geothermal heat project from ST1, Fortum and the City of Espoo was initiated in a CLC meeting. There are 15 theme groups ranging from energy to the circular economy and from agriculture to finance.

Developer of the carbon handprint

CLC, together with its members VTT Technical Research Centre of Finland, LUT University and several other companies have developed a carbon handprint concept, which tells about the positive climate impact of using a low-emission product compared to a higher-emission one.

CLC’s climate policy initiatives are mostly targeted at the EU. CLC worked together with its Nordic partners on an initiative to clarify the EU’s climate targets. CLC also drew up its own proposal for a more systematic climate solutions model, focusing on clarifying targets through a carbon budget, broader, more efficient emissions trading and the mechanisms to support it.

“The EU’s policy proposals include a number of the matters we have proposed and promoted. The carbon budget is now part of the EU’s climate law and the most significant section in the European Commission’s Fit for 55 package is the proposal to extend emissions trading. It’s pleasing to note that the matters that we consider important are progressing in the EU and we have received broad business support for them,” says CLC’s CEO Jouni Keronen.

Based on CLC proposal, together with our Nordic and European partners we founded and international Call on Carbon project which aims to show support of the global business community for effective carbon pricing. Globally, 3-5 times more investments need to be made in clean solutions to mitigate climate change. If companies cannot predict the price of carbon, it will hamper and slow investments.

“I encourage all companies and organisations that reduce their carbon footprint or develop climate solutions to look into what we do. Together, we can do more,” Herlin resolves. 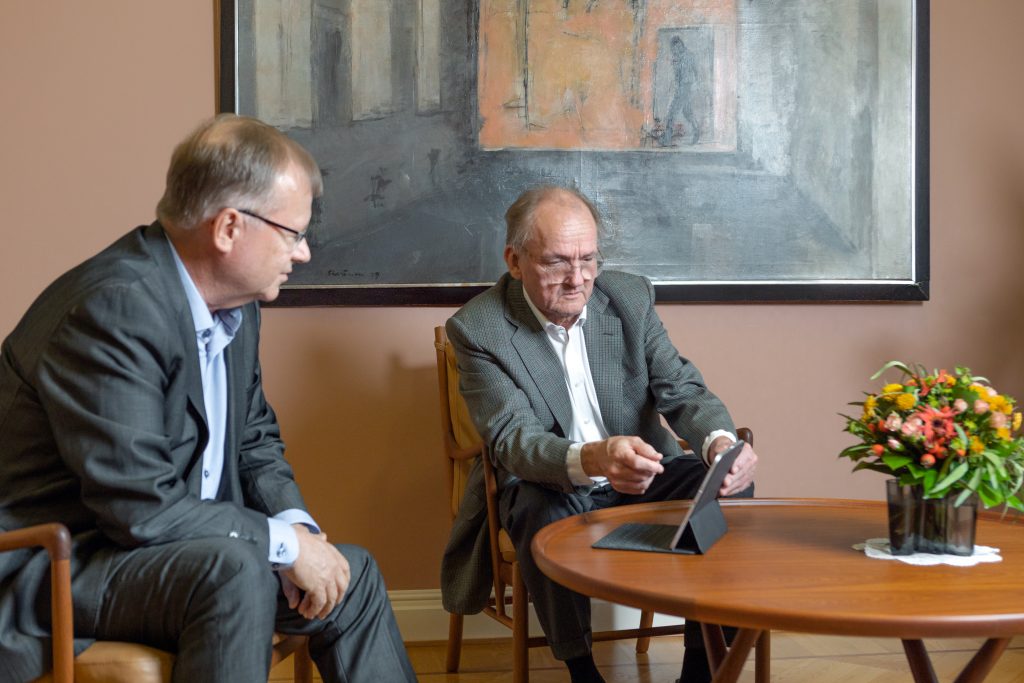 Jouni Keronen, CEO, Climate Leadership Coalition and Antti Herlin, Chairman of KONE’s Board of Directors, were among the founders of CLC in Munkkiniemi Manor, spring 2014.